The numerical simulation by parameter optimization techniques has been proven to be a powerful tool in human walking dynamics research [1, 2]. Although there are several studies related to human walking dynamics, not much attention has been paid to the prediction of human gait assisted by robotic orthoses or exoskeletons. The aim of this work is to investigate the influence of some design parameters of an assistive orthosis on the injured subject’s gait dynamics by using a predictive parameter optimization approach.

The gait of a spinal cord injured (SCI) subject wearing a robotic knee-ankle-foot orthosis is predicted using the parameter optimization framework presented in [2, 3]. Weakness factors for limiting the muscle activations of affected muscles are used to simulate the injury [3]. The analysed assistive device, which is intended for SCI subjects that preserve hip function, consists of an active knee module and a passive compliant ankle joint [4]. In this work, we analyse the influence of orthosis inertial parameters on the dynamics of the resulting assisted walking motion. To that end, the masses of the knee actuator and of the orthosis thigh/shank supports are varied within ±5%, ±10% and ±20% of their nominal values. Then, the evolution of kinematic coordinates and muscle forces and activations are obtained and compared.

Regarding kinematics, the variation of the mass of orthosis supports (thigh and shank) had a small effect on lower limb sagittal coordinates. Furthermore, changes in the mass of the orthosis thigh support had a larger effect in step length than changes in the mass of the orthosis shank support. Regarding muscle activations, those of iliopsoas and rectus femoris were not modified during the stance phase due to orthosis inertia variations, but were considerably altered during the swing phase. On the other hand, activations of tibialis anterior and soleus did change during the stance phase (Figure 1). 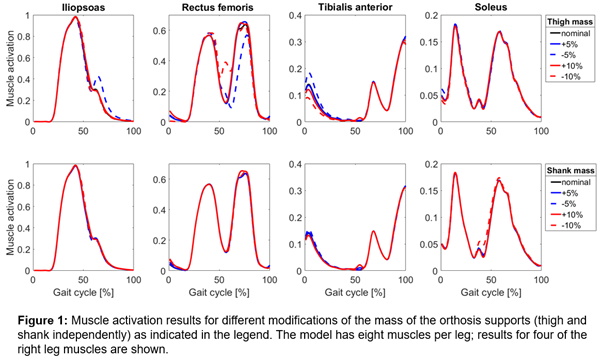 The presented methodology allows one to study the cause-effect relationships between orthosis or exoskeleton design and the dynamics of assisted gait. Results have shown that small changes of inertial properties affect the predicted motion and muscle forces. The proposed methodology opens a new perspective towards the subject-specific computational analysis of human-assisted gait, which might be useful for the optimal design of advanced assistive devices for rehabilitation taking into account the specific subject impairment.

This work has been supported by the Spanish Ministry of Economy and Competitiveness under the project DPI2015-65959-C3-2-R.