Deformation measurements of cardiac tissues provide information about heart function. Although the speckle tracking echocardiography (SPE) technique is useful for cardiac strain imaging, it is acknowledged to suffer from low reproducibility and lack of validation. Full-field measurements in vitro can provide localised, detailed strain characterisation of the cardiac surface under more controlled conditions elucidating the performance of clinical modalities. This work aims to explore the use of the 3D digital image correlation (3D-DIC) optical method to compute full-field strain measurements on the left ventricle surface of the cardiac biosimulator1.

The following conditions were applied to the cardiac biosimulator (LifeTec Group, Netherlands): cardiac output of 2 L/min, mean pressure values of preload to the atrium and afterload on the aorta of 16 mmHg and 63 mmHg, respectively. To enable DIC, a speckle pattern was generated on the cardiac surface2. Two calibrated cameras (PointGrey, Canada, 1024 × 768 pixels sensor, 25 mm lenses) were used to capture deformations in a 44 mm × 34 mm region of interest (ROI) including the left ventricle surface (Fig. 1(a)). The 3D surface strain was computed using Ncorr3 and custom Matlab (Mathworks, USA) codes. The first principal Green-Lagrange strain was calculated with the lowest pressure as the reference state and assuming homogenous strain within each triangular domain4. Previous zero-strain tests suggested a subset and step size of 29 and 5 pixels, respectively, providing a good compromise between spatial resolution and strain uncertainty2. 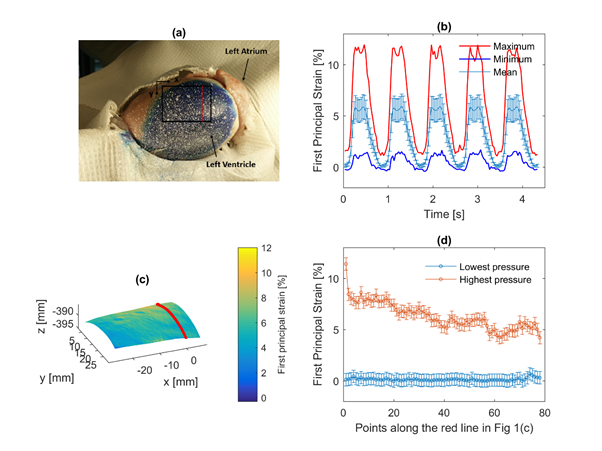 The maximum and minimum principal strain at the highest pressure was of the order 10% and 1%, respectively, as shown in Fig. 1(b). The mean and standard deviation of the strain values across the ROI are also displayed. Fig. 1(c) illustrates the 3D reconstruction of the left ventricle surface at the peak pressure, with variation in strain values along the circumferential direction of the heart (red line in Fig. 1(c)) shown in Fig. 1(d) at the lowest and highest pressure states (error bars represent the estimated strain uncertainty of 0.6%).

The 3D-DIC method demonstrated high repeatability in capturing left ventricular surface strain over several cardiac cycles. The strain magnitude reported in this study is consistent with other work4, in addition, the use of a full-field technique determined variability in cardiac strain over the ROI. Future works will investigate strain distribution under different conditions of the cardiac biosimulator and compare 3D-DIC and SPE measurements.