OpenSim is a software widely used across many different disciplines to simulate dynamic human movements and to predict muscle forces and mechanical joint loads. To predict muscle forces, OpenSim resolves a common optimization problem in which it attempts to minimize a function for muscle forces subject to the equilibrium equations and minimum and maximum bounds for active muscle forces. Major limitations of the current approach are: i) the solver fails to calculate realistic active antagonist muscle forces under certain situations, because activation of only the agonist muscles are sufficient to balance the external moment and satisfy equilibrium equations, and ii) predicted muscle forces remain constant when the external moment is constant, contrary to previous research finding that muscle forces vary regardless of a constant external moment [1]. To address these limitations, previous research has suggested considering mechanical stability as an additional constraint within the optimization problem [2]. Therefore, the purpose of this study was to develop a MATLAB-based framework for implementing stability criteria within OpenSim models.

The developed framework uses movement data from OpenSim to resolve the optimization problem similar to the current solver, but in addition considers mechanical stability criteria as another constraint. As a proof of principle, a simple spine model (i.e. inverted pendulum system with one pin joint, two agonist muscles (Muscle1 and Muscle2) and two antagonist muscles (Muscle3 and Muscle4)) was developed in OpenSim. This new framework was tested against the spine model during a static holding task loaded at varying heights, where the external moment was constant (Fig.1B). 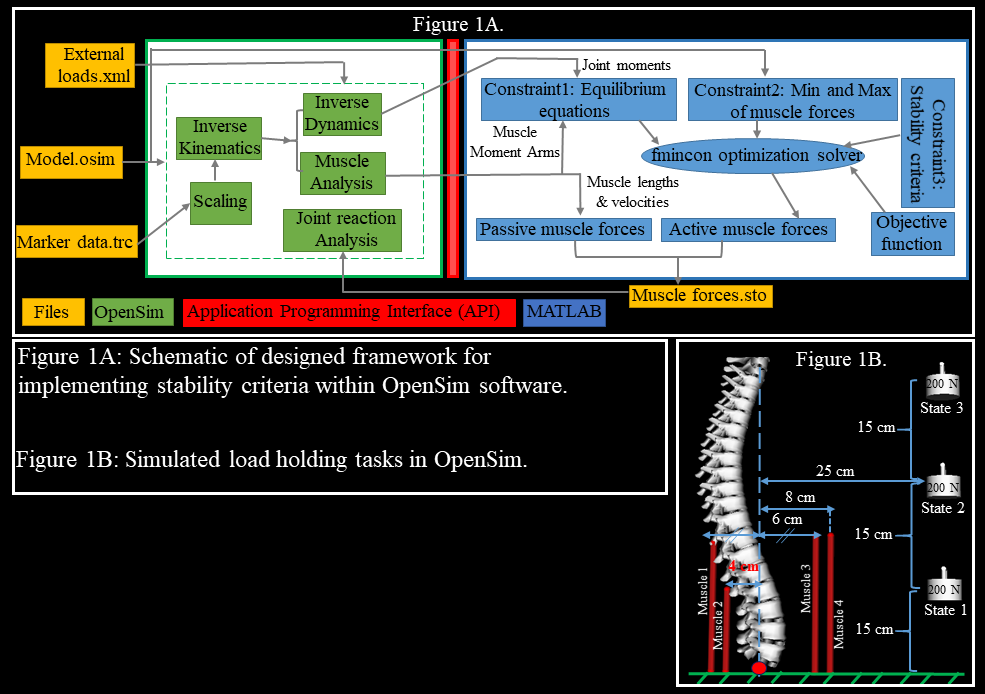 When mechanical stability was considered, the current framework estimated more physiologically accurate antagonist and agonist muscle forces than the current OpenSim solver. The proposed framework is recommended to be used for tasks that require large amounts of antagonist co-contraction to stabilize joints. Future research will examine the validity of the proposed framework with more bio-fidelic models and during more complicated tasks.