One subject (woman, age 16 years old, weight 58 kg) with an anterior cruciate ligament deficient knee was analyzed during four Lachman-tests [2] in both legs (injured and non-injured) using video recordings. A surgeon performed tests while a conventional mobile phone video camera (8 MP iSight) was recording the sagittal plane. A posteriori, images were processed for each time frame using MATLAB in four steps. First, green components were subtracted from the image. Second, a median filter in a 3x3 pixel window was applied to filter out noise. Third, the resulting image was converted to a binary image and objects with less than 300 pixels were removed. Finally, all connected components in the image were labelled.

Pivot point was calculated as the intersection of the axis between Gerdy’s tubercle and fibula head points, and the perpendicular of this axis crossing lateral epicondyle point. The range of motion of the distance between pivot point and Gerdy’s tubercle (AP translation, black line in Fig. 1) during the Lachman tests was calculated. Significant difference comparing injured and non-injured knee AP translations was considered when p<0.05 in a t-test. 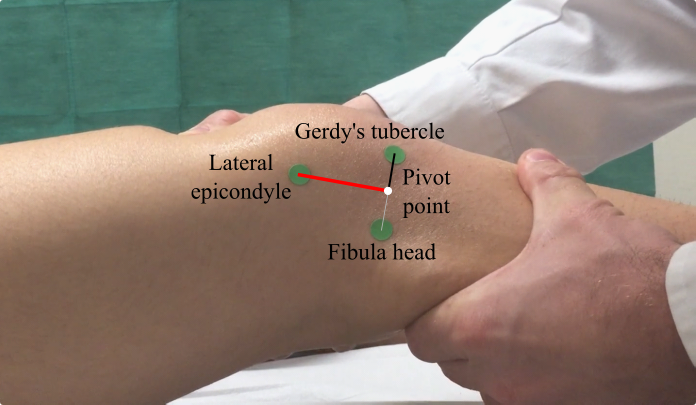 The range of motion of AP translations of the tibia with respect to the femur during Lachman tests were 1.8 ± 0.2 mm for the control knee (non-injured) and 4.6 ± 1.2 mm for the injured knee, which means there was statistical difference (p=0.018) between both sets of measurements.

Results show that we can observe statistical differences using this method. We are currently focusing on improving the analysis to be able to capture the movement in three dimensions from two video cameras and analyze the internal knee rotation during pivot shift tests [2]. This analysis will be applied to two samples of subjects with reconstruction of anterior cruciate ligament, with and without the intervention of extraarticular tenodesis.